THE RELATIONSHIP BETWEEN HEART STROKES AND DEMENTIA

Each year, an estimated 800,000 Americans have a stroke. Strokes can cause various complications depending on the part of the brain that is affected. One common complication of strokes is vascular dementia.

Dementia is a term used to describe a group of symptoms that include memory loss, confusion, and problems with thinking and reasoning. Vascular dementia can make it difficult for you to process information. Although it’s a common post-stroke problem, not everyone who has a stroke is at risk for vascular dementia. Your risk depends on the location and severity of your stroke. Your age, sex, and family history are also factors.

There are several possible explanations for why stroke increases the risk of dementia. First, a stroke can damage brain cells and disrupt the connections between them. This can lead to problems with memory, thinking, and perception. Additionally, a stroke can cause changes in the structure of the brain that make it more susceptible to degenerative diseases like Alzheimer’s disease (the most common type of dementia). Finally, having a stroke also puts you at a greater risk for developing other conditions that can lead to dementia, such as diabetes and hypertension.

What are the symptoms of vascular dementia?

The symptoms of vascular dementia can vary from person to person and from type to type. If you’ve had a stroke, you may find that your symptoms develop suddenly. Symptoms typically develop more gradually when vascular dementia is the result of another condition, such as small vessel disease.

If your vascular dementia is still in the early stages, you may also have trouble with:

It’s also common to experience mood changes. These may include:

Visiting a neurologist will help to diagnose the specific type of dementia by testing your balance, coordination, muscle tone and strength, ability to stand and walk, reflexes, sense of touch and sight. Brain imaging tests, such as a CT scan or MRI, may also be necessary. These can help your doctor identify any visual abnormalities.

Prevention goes a long way; research shows that controlling modifiable risk factors can reduce dementia by 50 percent.  If you’ve had a stroke, it’s important to be aware of the increased risk of developing dementia. Be sure to talk to your doctor about any changes in your thinking or memory and get regular checkups.

The neurologists at THE BRAIN CENTER are specially trained in the care and treatment of stroke patients. To learn more information about how our neurology team can help you recover from a stroke, call us at our office at: (786) 565-8735 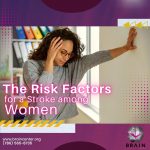 THE RISK FACTORS FOR A STROKE AMONG WOMENBlog 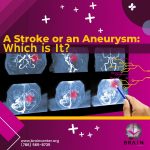 A Stroke or An Aneurysm: Which Is It?Blog