A Stroke or An Aneurysm: Which Is It?

When most people hear the word “stroke,” they think of an aneurysm. However, there are significant differences between the two conditions. A stroke occurs when there is a disturbance in the blood supply to the brain. This can be due to a clot, which cuts off the blood supply, or a bleed, which causes damage to the brain tissue. An aneurysm is a bulge in a blood vessel which can cause the vessel to rupture, leading to bleeding in the brain. Both strokes and aneurysms can cause serious damage to the brain and lead to death. However, there are some important differences between the two conditions. A stroke is typically caused by a sudden event, such as a head injury, whereas an aneurysm may develop over time. Strokes often occur without warning, whereas an aneurysm may be detected through medical imaging before it ruptures. Treatment for a stroke typically includes clot-busting medication or surgery to remove the clot, while treatment for an aneurysm may involve surgically repairing the blood vessel. Although both strokes and aneurysms can be life-threatening, early diagnosis and treatment can improve the chances of a full recovery.

Both a stroke and an aneurysm that bursts can come on suddenly without any warning. The symptoms will vary. The kind of emergency treatment you should receive will also depend on whether it’s a stroke or an aneurysm.

Some of the symptoms include:

Not all of the stroke symptoms will be present. If one or a few signs develop quickly, you should assume you are having a stroke. Call 911 immediately if you suspect you’re having a stroke. You won’t usually have symptoms if you have an aneurysm unless the aneurysm bursts. If an aneurysm bursts, you’ll get a sudden and terrible headache. You may also get sick to your stomach and vomit. The event may also make you very tired or can even cause you to go into a coma.

Sharing your symptoms and personal medical history with your doctor will help them form a diagnosis and treatment plan. CT and MRI scans can help your doctor diagnose an aneurysm or stroke. A CT scan shows the location of bleeding in the brain and areas of the brain affected by poor blood flow. An MRI can create detailed images of the brain. In some cases, your doctor may order both an MRI and a CT scan, as well as other imaging tests.

The neurologists at THE BRAIN CENTER are specially trained in the care and treatment of stroke patients. To learn more information about how our neurology team can help you recover from a stroke, call us at our office at: (786) 565-8735 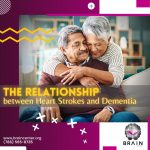 THE RELATIONSHIP BETWEEN HEART STROKES AND DEMENTIABlog 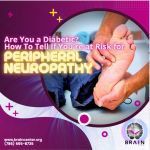 Are You a Diabetic? How To Tell If You’re at Risk for Peripheral NeuropathyBlog