Multiple sclerosis (MS) is a chronic, degenerative disease of the nervous system that affects approximately 400,000 people in the United States. Of these, approximately two to three times as many women as men.

The cause of MS is unknown, but it is believed to be an autoimmune disorder, in which the body’s immune system attacks healthy tissue. Symptoms of MS can vary widely from person to person, and may include fatigue, problems with balance and coordination, difficulties with speech and vision, and paralysis.

MS can also cause changes in mood and emotional stability. Women with MS often experience additional symptoms during menstruation, pregnancy, and menopause. As a result of these fluctuations in hormone levels, women with MS may find their symptoms worsen or improve at different times throughout their lives.

When a condition affects women more than men, scientists are likely to look at the role of sex hormones such as testosterone and estrogen. Pregnancy also affects MS remissions and relapses. During pregnancy, some women with MS notice a lessening of symptoms.

This can be followed by a flare-up after the baby is born. Postpartum relapse is a recognized phenomenon among MS researchers and patients.  Inflammation plays a role in MS, and obesity is linked to inflammation.

the rising incidence of MS among women may relate to body fat. Obesity is epidemic in the U.S., with over a third of American adults at a body mass index of 30 or higher.

Women typically carry more fat on their bodies than men, and obesity rates are higher for women as well. Belly fat is associated with increased inflammation. Carrying extra body weight may be especially risky for women.

The inflammation chemicals in women’s bodies are different from those in men and focusing research on these may provide clues as to why more women are affected.

MS affects more people living farther from the equator. The skin absorbs vitamin D from sunlight. Researchers are looking at the relationship between low vitamin D levels and a higher risk of developing MS, increased frequency of relapses and greater negative impact of the disease on patients’ lives.    higher vitamin D levels in patients with fewer relapses may also be linked to another factor, such as exercise. It could be that patients who are outdoors exercising absorb more vitamin D, but that the exercise itself could be lessening the MS symptoms.

As research reveals more about how genetics, environment and other factors increase a woman’s chances of developing MS, new ways to address the disease are likely to emerge. Despite the challenges posed by this disease, there are many treatments available that can help manage symptoms and improve quality of life for those affected by MS. 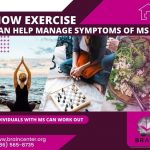 The Benefits of Specific Exercises for Multiple Sclerosis PatientsBlog